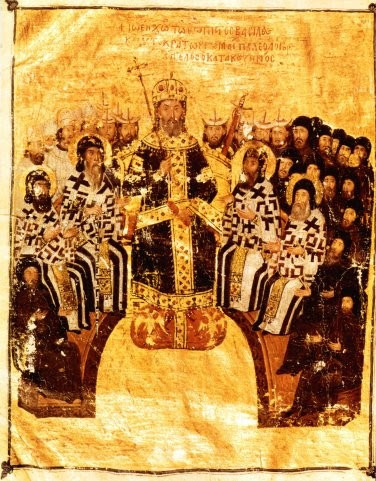 
The Synodal Tome of the Holy Council of Constantinople of 1351


“Every Power or Energy [of God] is God Himself.” These are the words of St. Gregory Palamas. [1] This “Power or Energy,” which is God Himself, as the Saint teaches us, is “boundless” and “before creation.” It is uncreated.
In his book, The Guide, [2] St. Anastasius of Sinai has the following paragraph:
Question: Does the appellation “God” refer to [God’s] Essence, or His Person, or His Energy, or is it a symbol, or a metaphor?
Answer: It is clear [the designation] “God” refers to [God’s] Energy. It does not represent the very Essence of God; for it is impossible to know this, but it represents and reveals His Energy that is able to be contemplated [by us].
This teaching of St. Anastasius of Sinai was confirmed and adopted by the Holy Council of Constantinople of 1351 in its Synodal Tome. The same Synodal Tome affirmed that the Grace or Energy of God “is called ‘Godhead’ by the Saints.” [3] St. Gregory Palamas endorsed this Synodal Tome of the Holy Council of Constantinople of 1351; this Council, in turn, endorsed St. Gregory’s Confession of the Orthodox Faith. These are clear-cut Orthodox Christian synodal resolutions, not the confused and contradictory decisions of later, Lutheran-style “synods” in Russia or elsewhere. [4]
In addition, St. Clement of Rome (c. ✠ 100) tells us that “the Name of God is the origin of all creation” (First Letter to the Corinthians 59:2–3).
St. Cyril of Alexandria (✠ 444) teaches that Christ’s disciples “ought to be kept in the Name of the Father, that is to say, in the Glory and Power of His Godhead” (On the Gospel According to St. John, bk. 11, ch. 9).
St. John Chrysostom (✠ 407), in his explanation of Acts 3:16 (“And His Name, through faith in His Name, made this man strong”), like the Apostles and all our Saints, also recognizes that the Name of God is one and the same as the healing Grace and Energy of God when he writes that “[the Son of God’s] Name raised up the lame man, who was like one dead” (Homilies on the Acts of the Apostles 9).
St. John of Kronstadt (✠ 1908) affirms this teaching of the Saints when he tells us that “His Name is [God] Himself” and “The Name of God is God Himself” (My life in Christ, trans. by E. Goulaeff, London, 1897).
Consequently, any later “council” or “synod” — whether it be Russian, or Greek Old Calendarist, or New Calendarist, or whatever — that contradicts these resolutions of the Holy Council of Constantinople of 1351, the Synodicon of Orthodoxy, and the teachings of the Saints is not an Orthodox council or synod, but a false synod, a pseudo-council, not accepted by the Orthodox Church, and those who concur with such false “synods” are themselves guilty of the heresy of Name-fighting — fighting against the Name of God.