(#5) 2015 Scripture Readings Booklet. Available separately for those who have not purchased a Full-Size Wall Calendar, which already includes this booklet. $2.00.

If you are affiliated with a parish or mission of the Holy Orthodox Church in North America (HOCNA), you should submit your order directly to your parish’s rector, your head of mission, or the layperson who has been delegated to handle calendar orders. Please note that parish rectors who attended the recent Clergy Synaxis have already submitted a calendar order for their parishes. These orders will be given priority, so we ask that you order directly from your parish, if possible. You can print and fill out the Parish Order Form for 2015 Orthodox Church Calendars, which is attached, and submit it to your parish rector, head of mission, or designated layperson, by Sunday, November 1, 2014 (n.s.).

If you are a parish rector who could not attend the Synaxis, or a head of a monastic community, or a head of a mission, we ask that you email the attached Email Order Form for 2015 Orthodox Church Calendars, which is attached, to info@homb.org, by Monday, November 1, 2014, according to the civil calendar.

If you are a family or individual who is unable to order calendars from a parish or mission, you can fill out the attached Email Order Form for 2015 Orthodox Church Calendars, which is attached, and email it to info@homb.org, by Monday, November 10, 2014 (n.s.).

Email ThisBlogThis!Share to TwitterShare to FacebookShare to Pinterest
Labels: Publications 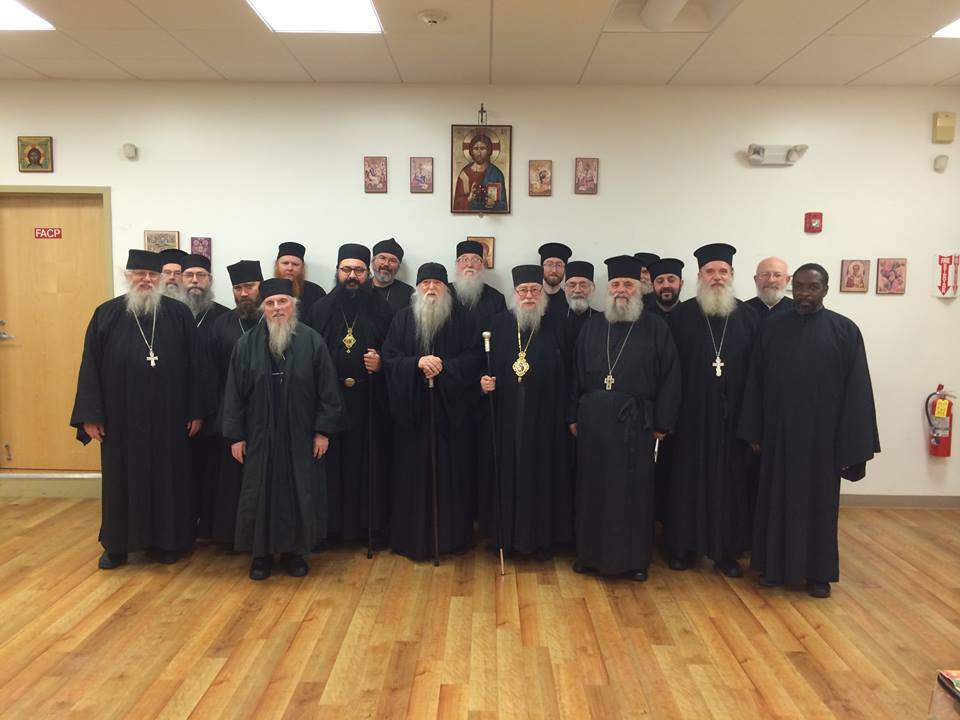 The Holy Orthodox Church in North America convened its annual Clergy Synaxis on Friday, October 3, and Saturday, October 4, 2014, at St. Anna’s Hall in Roslindale, MA, followed by a Hierarchal Divine Liturgy on Sunday, October 5, at St. Mark’s Orthodox Cathedral, also in Roslindale. Present were Their Eminences, Metropolitan Ephraim of Boston and Metropolitan Makarios of Toronto, and Their Graces, Bishop Gregory of Brookline and Bishop Andrew of Markham, along with a little under twenty clergy.

Friday began with the Divine Liturgy served by the clergy of St. Anna’s, Archpriest Dimitry Kukunov and Deacon Savas Papadopoulos. Four sessions followed: diocesan reports, a forum on recent events, clergy agenda issues, and a lecture by Hierodeacon Samuel of Holy Transfiguration Monastery entitled “Human Language and Divine Revelation: On the Theological Nominalism of Metropolitan Anthony (Khrapovitsky) and Fr. John Romanides.” The day concluded with Vespers, celebrated by Hieromonk Chrysostomos and the newly-ordained Deacon Stephen Johnson of the St. Cosmas of Aitolia Orthodox Church in Lanham, MD, and dinner.

Saturday again began with the Divine Liturgy, this time celebrated by Archpriest Ihnat Ponomarchuk and Deacon James Dimock of the St. Nectarios American Orthodox Cathedral in Seattle, WA. Two talks were then delivered: Thomas S. Deretich of Boston spoke on “The Kallinikos-Cyprian-Agafangel Unity Agreement of Old Calendar Synods in March 2014: An Act of Betrayal Against the Legacy of Saint Philaret the New Confessor and Against the True Orthodox Christian of Greece”; and Protopresbyter Andrew Boroda of the Prophet Elias Orthodox Church in St. Paul, MN, spoke on various matters of practical pastoral concern.

On Sunday a Hierarchal Divine Liturgy was celebrated at St. Mark’s Cathedral by Bishops Gregory and Andrew, with Metropolitan Ephraim in attendance, who also delivered the homily (Metropolitan Makarios had to return to Toronto). All remaining clergy concelebrated at the Liturgy, after which a festive meal was held in St. Mark’s Hall.

The 2014 Clergy Synaxis of the Holy Orthodox Church in North America was a time of fraternal association, lively discussion, edifying talks, and, most importantly of all, of joint prayer and Eucharistic fellowship.

Photos of the concelebration and the reception: